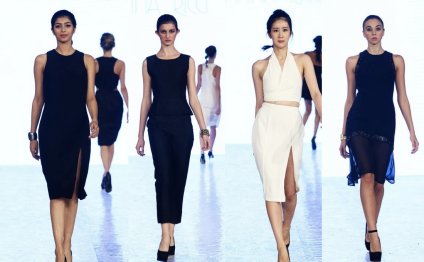 A recurrence of tribal themes was omnipresent in black-and-white. Céline, Valentino and Junya Watanabe created a fashion equation that equaled folklore style plus graphic efficiency.

Left to right: and Valentino

Uniform styling made a large comeback throughout the choices, with armed forces design codes reinterpreted for the women mainly in khaki, at Anthony Vaccarello, Céline and Versace.

Kept to right: and Maison Margiela

Be it mirror impacts and light-reflecting cup shards at Loewe, a shower of iridescent crystals at Chanel or galactic leathers at Courrèges, expect to invest in metallic gold after that summertime.

The greatest trend associated with the period, underwear accents had been all around the runways. Believe sheer designs, lace, silks and satins that skim the human body to set sensuality bare vintage details.

Remaining to right: Givenchy, Céline and

From the rainbow colors at Chloé to Prada's geometric Technicolor vision, via candy shades at Salvatore Ferragamo, blocky stripes were a visual catwalk sensation.

From left to correct: Salvatore Ferragamo, Prada and Chloé

Empowered by far-off lands, ancestral rituals and people art, the tribal trend exploded regarding the catwalk in a mash-up of cultural images and mineral colors.

Some severe glow strike the runway at Lanvin, Nina Ricci and Vêtements, as designers ramped up the iridescence to disco-ball amounts. Get ready to shine after that summer, as head-to-toe sequins and pailettes move from club to sidewalk.

From left to right: Lanvin, Nina Ricci and Vêtements

Although summertime 2016 is all about the 1990s, the 1970s are inspiring developers, such as in tailoring. Alessandro Michele twisted Bianca Jagger's trademark piece into emerald brocade at Gucci, while Vanessa Seward included kaleidoscope images and Marc Jacobs sent purple and black colored striped suiting along the catwalk.

From left to correct: Marc Jacobs, Gucci and

With extra-long clear tulle at Miu Miu, volume at Louis Vuitton and absolute chiffons at Lanvin, dancing goes away from barre course to just take manner by storm, bringing slightly airiness and refinement to your styles for Summer 2016.

From left to right: and Lanvin

Seen in the airy breathing of a variety of yellow, purple and black colored feathers woven into a Nineties slip gown at Proenza, the delicate fabric dresses at Nina Ricci plus the conceptual appearances that have been pure Comme diverses Garçons on catwalk.

The typical denominator at Loewe, Mugler and Valentino, ended up being metallic fringing that played with the light; from extremely futurist silver foil threads, to a deluge of men on leather-based and two-tone trompe-l’œil pleats.

From left to right: Loewe, Mugler and Valentino

From stylish clothes to knit mariner sweaters via a fringed lamé jacket, style travelled the Stars and Stripes through the selections. An astrological reverie is in the stars for after that summertime.

From left to correct: Marc Jacobs, maximum Mara and

From Isabel Marant's bright brand new reworking, to a far more androgynous version at Louis Vuitton via Ralph Lauren's polished uptown girl, the jumpsuit is sticking around for after that summer. Use loose or skinny-belted.

Patent, lacquered, scarlet, matte or silky, purple is hands-down the color associated with season and set to raise the heat after that summertime.

From left to correct: Fendi, Nina Ricci and Hermès

Echoing this season's futurism, mesh took center phase in a graphic fashion, in a riff on Mad Max-era Tina Turner, Cloud Atlas and Grace Jones in Conan the Barbarian, because the women took on space-warrior personas in a nod to Heroic Fantasy.

From left to right: Chanel, Louis Vuitton and Valentino

an installation of urban dressing, Diana Vreeland's trademark print combines daytime cool with night glamour in one swipe associated with the leopard's paw.

From left to right: Bottega Veneta, Versace and Roberto Cavalli

Revisited in moss green at Ralph Lauren, zig-zag stripes at Giorgio Armani and slouchy satin at Alexander Wang, riffs on Breton stripes tend to be most certainly nevertheless with us for Spring/Summer 2016.